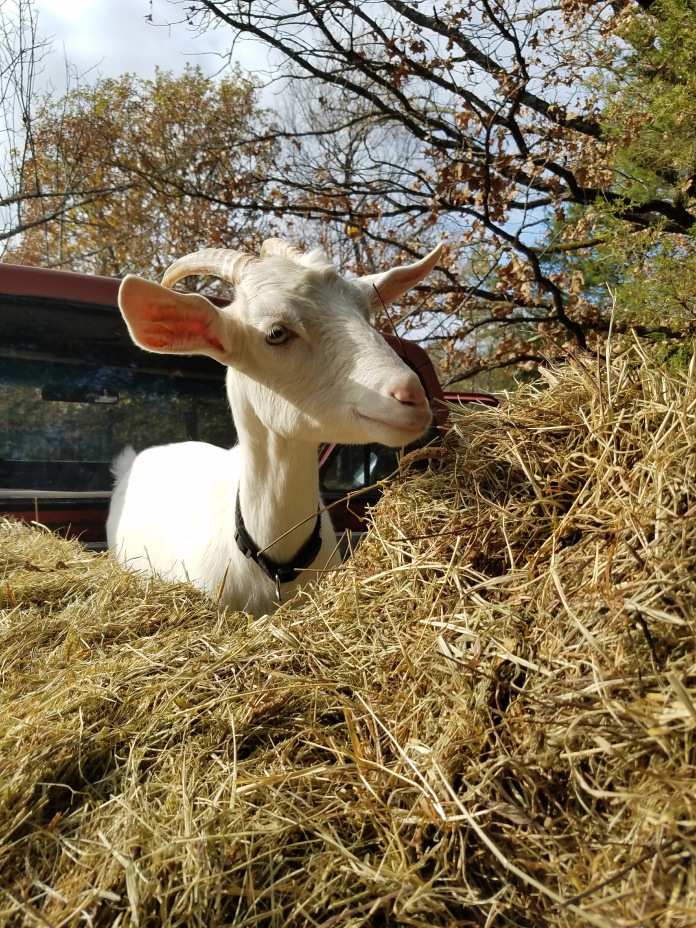 I dug a spent shotgun shell out of the ground as I tried to figure it out.  What more could I do to create an environment that would make Florentina and Buckminster feel secure enough to treat Abba better? They constantly head butt her away.  She stays with them because they are all she has.  I have to forage with them in order to limit the abuse.  I walk behind them with a long bamboo pole.  I simply insert the pole between the offenders and the victim to interrupt the behavior. I try giving each of them extra attention and extra everything.  Things improve for a short time only to go back to Abba being harassed by the others again.

When the animals are quiet, they are happy.  This makes me happy.  Florentina never stops crying. I thought maybe it was because she does not have a herd.  So I got Abba in hopes that Florentina would be calmer if she had more of a herd.  But she only sees Abba as a threat to her ability to find enough food for her and Buckminster.

I got Florentina and Buckminster for Catalunya to have some company. But they only  challenge him, invade his space, take his treats and food as if everything in the world were theirs.  I’d hoped he delight in their company and share.  But he’s wishy-washy about it.Abba tried everything to win over Florentina.  She tried staying out of her way, kissing up to her, following her, but not too closely, waiting for her to exit the barn first, allowing her to come in and inspect Abba’s pen and eat whatever was left.

The way the other goats treated Abba was so heartbreaking to watch.  It reminded me of the scene in Jane Eyre, where a tiny Elizabeth Taylor plays the beautiful child stuck in a Quakerish English orphanage. The jealous crone nuns cut off her gorgeous long black curls and make her stand in the cold rain until she dies of pneumonia as a punishment for her evil temptress beauty.

I’m also reminded of the scene in Divine Secrets of the Ya-Ya Sisterhood, where Ashley Judd’s character is sent away to a girls school by a jealous mother tired of watching her husband treat their beautiful daughter as though she is his bride. Rather than punish the father for his inappropriate attention, the prudish and aging devoutly Catholic wife sends her daughter away.  The nuns and fellow students ostracize and torture her for having been born beautiful, sensitive and intelligent. Her beautiful hair is cut short. She is finally rescued by her dead fiancé’s mother and friends.

One day when Abba and Buckminster were in their outdoor pen, Buckminster began to headbutt and mount Abba until she was very distressed.  I was on my way to break it up when I noticed Catalunya kicking up a fuss. He was repeatedly galloping in a large circle then charging towards the fence directly at Buckminster .  He did it several times until the young goats began to walk around in circles trying to figure out what his deal was and Alan emerged from behind the potting shed wondering the same.

After Catalunya had made about six laps, Abba began to charge the fence straight towards Catalunya at the exact same moment that Catalunya was charging straight towards them.  We all came to understand that what he was doing was for her. Their noses met at the fence and they both cut to the left at the exact same time. She began to boing down the fence line in exact synchronicity with Catalunya’s galloping.  Her hoofs hit the ground at the exact same time that his hooves hit the ground. Their rhythms became one. This was quite something as obviously their legs are of very different length. This animal behavior display that was so fascinating that we could not stop watching long enough to grab our cameras.

Finally, Catalunya stood calmly with his butt to the fence. Buckminster pranced around bewildered and Abba sprung about with a glow; buoyed by Catalunya’s gallant support.  We looked at one another in amazement.

I was so upset by Abba’s treatment from Florentina (and Buckminster following suit) and by the fact that I was unable to find a way to resolve it, that I sold Florentina to a nice lady with a huge farm full of cows, pigs, and other goats.  The lady agreed to take Buckminster as well.  I hoped that having each other would lessen the trauma of having to integrate into a new group. They were not bad goats.  Florentina was smart, brave, affectionate, a great leader and stellar mother. She hated her utters touched but still did well on the milkstand that Alan built.  Buckminster was loyal, curious, and loved to get on the milkstand too.  I’d let him get up there  like his Mommy and eat grain while I clipped his hooves.  He loved to be groomed. But, the underdogs need to be championed, so; Abba stays.

With the other two gone, Abba’s voice became louder and clearer.  She’s not a big complainer.  She used to only cry after Florentina cried.  She never initiated.  She always bowed to the lead goat; tried not to be a bother, tried limiting the light and the love that she naturally offered to the others and wanted from them, in order to avoid getting headbutted out of the way. I saw the light going out of her eyes and I knew that feeling of suppression.

But now her communications are more complex. On the first day that Abba was without the other goats, she let out a descending scale of meh-eh-eh-eh-wah-ah-ah-ah, then a step down the scale meh-eh-eh-eh-wah-ah-ah-ah, then a step down with each new phrase: meh-eh-eh, meh-eh-eh, meh -eh-eh-eh, meh-eh-eh. Like a great  back up singer. When Catalunya entered the barn she quieted down. I stayed with her for a long time and brushed her and fluffed her pen.  She leaned into my hand when I scratched around her horns.

Catalunya watches over her but chases her out if she comes in his fenced area. At night he stands in front of her pen and stares straight in. She learns quickly and stays near but respects his space.

Now he tries to eat her ear through the fence during play. They run up and down the fence line and he suddenly stops, moves his rear to the fence for her to groom his legs. When she’s tired of his hind end she headbutts him through the fence until he turns around and pays attention to her.

Abba needs help foraging now more than ever.  The only green things are the privet chutes above the previously goat mauled line and honeysuckle vines who’ve woven themselves into the tops of the trees to catch the light. I bend down the branches and she leans into me and allows me to scratch her hips as she snaps off the twigs with her little fish teeth and rolls the leaves between her lips until they are devoured. When it’s cold I just put the forage in her pen and Catalunya,  suddenly acquiring a taste for privet, pulls some of her forage through the pen and eats it.   She shares. Whatever she’s having, he’s having too.

The sounds of their chewing in place of Catalunya’s anxious squeaks and Abba’s lonely bleats lets me know that they are content. Their happiness is so palpable.  It is the most satisfying feeling knowing that one can create contentment, confidence, and a feeling of security for others.  It is a way to create it for myself.  All of the things that I longed for when I was their age (they are both toddlers). I used to dream that I had a big brother who would protect me.  Catalunya teaches me how to champion others who are vulnerable and how to champion myself. Creating a loving space for Abba and seeing how it has helped her to find her voice reminds me of those who’ve helped me in finding mine.